WHEN THE BRIGHTEST STARS OF MUSICAL COSMOS SHONE TOGETHER

Pandit Budhaditya Mukherjee mesmerized the audience by presenting an extremely melodious raag ‘Puriya’ accompanied extremely well by Soumen Nandy on tabla. A spectacular concert by Vidwaan Kumaresh & Dr. Jayati Kumaresh followed the sitar rectal who were accompanied by none other than the legend himself – Ustad Zakir Hussain. 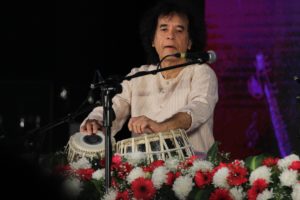 Padma Bhushan Ustad Zakir Hussain – a music producer, film actor and eldest son of legendary tabla player Ustad Allah Rakha is universally acknowledged as a virtuoso, composer and percussionist whose tabla performances are of the “highest order and marked by uncanny intuition and masterful improvisational dexterity. He is the one who did not stop after mastering Hindustani Classical Music but has also collaborated, jammed & made music with many Western musicians. 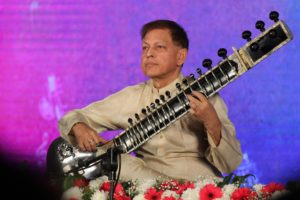 Son and disciple of Acharya Bimelendu Mukherjee. Pandit Budhaditya Mukherjee is an Indian classical sitar and surbahar maestro of the Imdadkhani gharana recognizable by his intricate vocalic playing complemented by spectacular high speed playing. A trailblazing sitarist, who has been conferred the Padma Bhushan, is credited with having promoted his gharana, not just through technical innovations on the sitar, but also by passing down his learning to a number of students who continue to spread his music. Exploring the gayaki-ang through the tappa form has been one distinct mark of identity for the Imdadkhani Bimalendu stream, as borne out by the renditions of Pandit Buddhaditya on sitar. 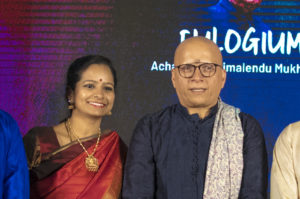 Voilin Maestro Kumaresh, fondly known as Fiddling Monk, is a limitless phenomenon whose musical career spanning 43 years has created a paradigm shift in the way the world looks at Indian Violin. His father/Guru Sri. T. S. Rajagopalan, mother P. Bhanumathy and his brother and mentor Sri. Kumaresh has collaborated with various world class musicians from different genres in Jugalbandhis and Duets. His combination with his wife Veena Maestro Dr. Jayanthi Kumaresh in a production called “STRINGS ATTACHED” is a delightful combination of music, melody, aesthetics and flamboyance. Dr. Jayanti Kumaresh is one of the foremost Veena artistes of India. Jayanthi comes from a lineage of musicians who have been practising Carnatic music for six generations and started playing the Saraswati Veena at the age of 3. 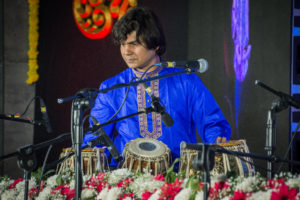 Soumen Nandy is a tabla maestro from West Bengal. He trained under Pandit Pankaj Chatterjee of the Farukhabad gharana, and is a regular on the finest stages of Kolkata’s classical music scene. His style is energetic yet sensitive, and has been appreciated by numerous top-level musicians.