Acharya Bimalendu Mukherjee was an outstanding Classical musician, whose contribution to music, both as a performer in his time and as a Guru, has been acclaimed by all. He is the “Acharya” – the enlightened teacher – the path-giver to accredited musicians as well as aspirants. 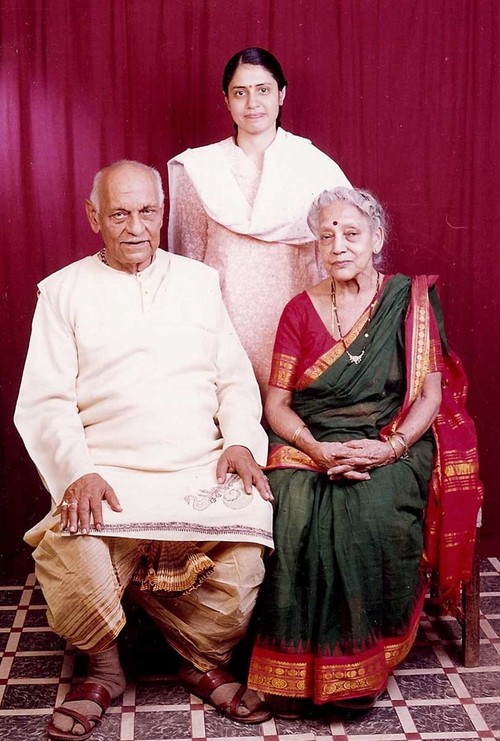 Acharya Bimalendu Mukherjee was born in an art-loving Bengali family at Chinsurah West Bengal, on 2nd January 1925. His grandfather and father were both civil surgeons in Bengal Medical Service. He did his schooling from Mrityunjay School, Mymensingh (now in Bangladesh) and later graduated from Presidency College, Calcutta, with a degree in Geology in 1946, and thereafter acquired a Masters Degree, obtaining a first class, in Geology in 1948, from Calcutta University. Acharya Bimalendu joined the “Geological Survey of India” as a Geologist in 1949 and then worked in the “Indian Bureau of Mines” in 1951. He was entrusted with the responsibility of managing the mineral resources of the Bhilai Steel Plant, as soon as it was established in 1955. He looked after all aspects of exploration, development and exploitation. Since then Bhilai became his permanent home. He took voluntary retirement in 1983 as General Manager (Mines) and Additional Director CRMM SAIL, when the Govt. of Madhya Pradesh selected him as the Vice-Chancellor of Indira Kala Sangeet Vishwavidyalaya, Khairagarh in Madhya Pradesh. He completed his first term as Vice Chancellor in 1985. He was given the same responsibility in 1988 and he put in his best efforts for the institution.

Bimalendu Mukherjee was primarily a Sitarist, though he was proficient in almost all traditional Indian instruments like RudraVeena, Saraswati Veena, Surbahar, Sursingar, Mandrabahar, Dilruba, Esraj, Tar Shehnai, Sarod and Pakhavaj. He was equally adept in vocal music.

“A Guru does not go by the standard norms of teaching alike for all. But by identifying the strengths and interests of the student, he takes a course that will give an individual character to his/her music. My Guruji was one such visionary.”
– Anupama Bhagwat

His contributions to the family of stringed musical instruments are the unique “Aditya Veena” – named after his son Budhaditya – and the “Bijoy Veena” – named after his grandson Bijoyaditya. He also revived the ‘Ektantri’ single-stringed Veena – an instrument referred to by Sharangdev – and the Sur Kanan. Besides, he has experimented, modified and improved the structure and tonal quality of many stringed instruments like the Sitar , Sarod, Surbahar, Rudraveena, Esraj, Guitar, Dilruba and the Veena.

Bimalendu Mukherjee had been constantly experimenting with the Western and Eastern philosophy of medical treatment. He created ‘Raga Anandamayee’ in That Kafi. His son – Budhaditya Mukherjee, has recorded the Raga in a novel way on the Sitar . This recording, released with the title “Anandamayee” (full of bliss and happiness), has been successfully experimented on patients of hypertension.

Acharya Bimalendu introduced the people of Bhilai to fine arts like music, dance and painting. He exposed Bhilai to many fine artists of India and their works. He won acclaim for his stage performances and radio broadcasts between 1940 – 1960. After the sixties, he was busy with his administrative responsibilities, assignments and obligations, which allowed him little time for stage performances. When he joined the Khairagarh University as a Vice Chancellor, forty organizations united to felicitate him for his long years of service to the Bhilai community.

He had also written treatises and commentaries on musical subjects. His article published by “All India Kashiraj Trust’s Dhrupada Varshiki” issue (Dhrupada Annual) on the importance of intricate technical aspects of stringed instruments is most enlightening.

Bimalendu Mukherjee was sent to the U.S.S.R. in 1962 for learning about the Russian Mineral Exploration system and during his stay at Moscow he was introduced to European art and music at the Chekhovsky Conservatoire. During his tenure as Vice Chancellor, he visited many countries in the East and West to assimilate and understand their musical heritage, their music-education system and approach to the performing art.

He represented India in the Bi-annual International Conference, being invited by the President of the International Society of Music Education, Eugene, and U.S.A. In 1984 the King of Thailand invited him to the 7th conference of International University President forum, which is held every three years. He gained a first hand knowledge of the educational systems of many internationally reputed universities and he incorporated many scientific, technical and communicational aspects of education in the University under his charge.

Bimalendu Mukherjee trained students continuously from the 1960’s, and his home in Bhilai was a famous seat of learning for students from India and abroad, who flocked to him, for guidance. Acharya enlightened, guided, trained and inspired music loving individuals and students with his wisdom, knowledge and profound grasp of traditional Indian Classical Music. Among his outstanding pupils are his son, Budhaditya Mukherjee, his grandson Bijoyaditya and Anupama Bhagwat. He also had the unique distinction of having groomed eight students who have stood first in All India Radio music competitions. Acharya Bimalendu Mukherjee single-handedly made Bhilai an oasis of Indian classical music.